It all started out innocently enough.  I was sitting in my usual chair at the nail salon.  I say “usual” because every 3 weeks for the past 3 years Viet has manicured and polished my fingernails.  I flipped through the basket of nail colors not really expecting to make a change from the palette of pinks or reds that are my norm.

A murmur of voices filled the air as three other customers quietly chatted with their nail techs.  I said, to no one in particular, “Who in the world would ever paint their nails this turquoise blue color?”

Much to my surprise, several women in various stages of manicures turned towards me to see the blue nail tip I held in my hand. “Oh that is a gorgeous color of blue,” one of them remarked.

“What a fun color for spring that is,” said another.

“But it is BLUE!” I said as I placed the colored tip over one of my fingernails, to show just how ridiculous the blue nail looked.

At that moment the three customers and the three nail techs all chattered at the same time.

“Colors like blue are fun for a change,” they said.

“Everybody is wearing all sorts of nail colors these days,” they said.

Just then, Viet arrived at his station.  “Oh, fun!” he said, “that is a beautiful color on nails, especially with a layer of glitter!  You will love it and besides … it matches what you are wearing today!”

“Oh, no, no, no” I exclaimed.  “Do you even know me?  I am pretty conservative, fairly modest and do you remember I just turned 62?” 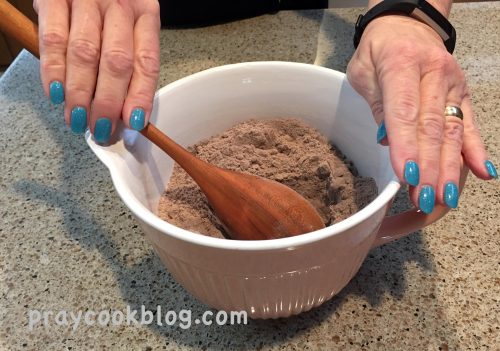 “That is exactly why you should choose the blue today!  Step out of your comfort zone, live a little!” he said, laughing loudly encouraging the others to join in. Besides, it will only last a couple of weeks and then you will change it back to your old standby, pink or red or something boring.”

Boring?  Is he calling me boring?  Ah, peer pressure.  Just then all my little gray brain cells went on vacation and I said, “Yeah, you are right.  I wear this color a lot and what is the worst that can happen?”  Next time I am going to have my nails painted blue!  Next time.  Not today.  Next time.  In a couple of weeks.

I had exactly three weeks for my brain function to return.  Sadly, it did not. I made the decision and without any further thought, I planned to pick out the turquoise blue nail color upon my return to the salon.

Three weeks later, Viet’s sister, Tu, squealed with delight as I handed her the blue nail tip. “This is the one,” I said, “with a coat of glitter, please.” 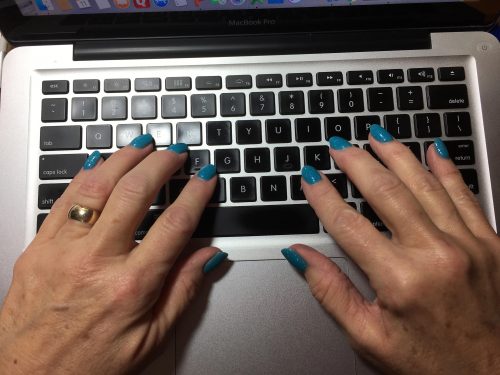 “Oh, you are going to love this, it is so pretty,” she said as she readied my nails for the polish.

The minute the first stroke of polish hit my nail I knew I had made a terrible mistake. It was as if all my little gray brain cells, that had previously been on vacation, came rushing home just in time to scream out, “What in the world have you done?!” I sat speechless and immovable. One finger, then two turned blue. Three and four followed closely behind. Wow, the thumb looks really BIG when it’s blue. Ten blue fingers later I said a quick prayer of thanks that I hadn’t also committed my toes!

Tu, the owner of the salon and my nail tech for the blue fiasco, was so intent on the beauty of the blue nails she never saw the horror on my face. She encouraged me to wear “lots of turquoise blue” this week and to stay away from wearing anything green!

“Oh brother,” I thought, I am in deep trouble. I usually don’t put that much thought into what I am wearing.

My sous-chef dish-washing mom was with me at the nail salon. She is too kind to say anything other than, “Oh, that’s a pretty color, Dear.” However, I’ve had some fun with my trendy, sparkly, blue manicure mostly because of the shock factor.

During dinner, my darling husband exclaimed, “What happened to your hands?”

“I had a manicure today,” I said with no particular excitement, as I held up my newly painted nails. With a twinkle in his eye, he set down his fork, took my hand and said, “Are you cyanotic or psychotic?”

“No,” I replied, twinkling right back at him. “Just a little blue today.” 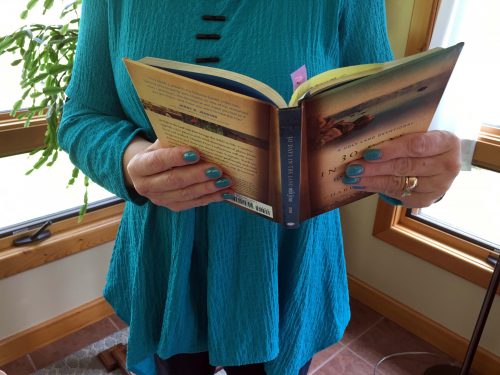 As I read scripture after scripture this week it seems I kept running into characters with peer pressure problems. Peter certainly had a peer pressure problem when he told Jesus he was the one who would be loyal and faithful to Jesus when he said,  “Even though they all fall away, I will not.” (Mark 14:29 ESV)  And yet, before the rooster had crowed in the morning, Peter denied having anything to do with his friend and leader.   Peer pressure got to Peter, as it seems it was more important to fit in with strangers than to publicly identify with God’s only Son. 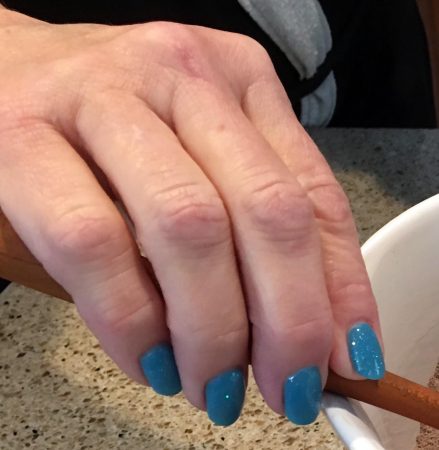 I haven’t done anything wrong painting my nails blue. But I am disappointed in myself that I painted them blue because of what others thought and said.

Dennis Wolfberg once quipped, “There’s one advantage to being 102. There’s no peer pressure.”

I’ve only got two more weeks until I return to the salon. Next time I think I will choose something quite boring like pink, red, or even peach!

10 thoughts on “Peer Pressure Is No Respecter of Age”