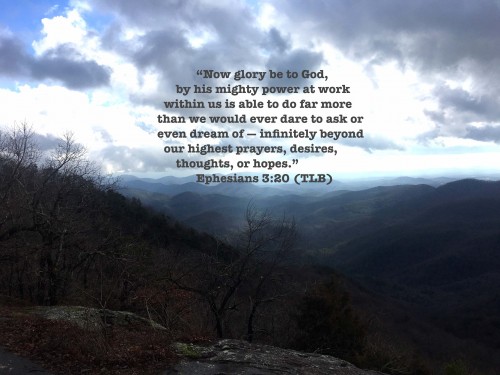 What is your dream?  You know, that dream you have carried around with you for many years?  That dream that no one else knows about but surfaces in your daydreams from time to time? That dream that takes you back to your childhood.

When my husband, Lee, (aka Chief, Chief Food Taste, Chief Culinary Consultant, Chief Traveling Buddy, Chief Gardener, Love of my Life) was a little boy he grew up in middle Tennessee only a few miles down the road from where we live now.  His mother’s family populated this area then and now.  He father’s family hailed from Eastern Tennessee.

East Tennessee is a name given to about the eastern third of the State of Tennessee.  East Tennessee is entirely located within the Appalachian Mountains.  It is both geographically and culturally part of Appalachia  and has been included— along with Western North Caroline, North Georgia, Eastern Kentucky, Southwest Virginia and West Virginia – in every major definition of the Appalachian region since the early 20th century.

For as long as he can remember he as been drawn to those mountains.  He says “I just think they are part of my DNA.” It was many years ago as a small boy and again later in his life that the dream of hiking the Appalachian Trail took form.  All his life he has been active in hiking, biking, running, and just enjoying work outside. For many years of his career he was behind a desk in an office, or sitting in a board room.

Every chance he gets he escapes to the great outdoors, then and now!   It was absolutely no surprise to me  when a couple of years ago he shared with me a lifelong dream, a calling, to the Appalachian Trail.

He writes, “In 2014, I mustered up enough courage to suggest to my wife that I might possibly do a thru-hike on the AT. I told her I thought it would be a “neat thing” to do (obviously that thought only existed in my mind.)

The very first thing that she wanted to know is “who’s going with you?” I proceeded to explain to her that it would be a “solo hike.”  That is when she proceeded to explain to me that wasn’t such a good idea. 🙂  However, she did say “if you can get someone to go with you, you will have my blessing.” (I believe that she was quite sure I would be unable to find anyone crazy enough to do something like this and that would be the end of the story.)”

He and I have had many discussions of what hiking the AT looks like. I would say, “let’s pray about it and if it is meant to be, the Lord will confirm it.”  Then once I said,  “honey, we live close enough to the trail, you can go for a week or two, come home and then go back later.”  That is when I learned that his dream is a thru-hike.  A thru-hike  means starting at Springer Mountain, Georgia and hiking to Katahdin Mountain in Maine. Straight through.  No coming home in between (the good Lord willing.)

I pondered that for a while and came up with another brilliant idea!  We could rent a motor home, he would hike during the day and at the end of each day, I would meet him, pick him up, cook him dinner and he could shower and get a good night’s rest before setting off the next day.  This seems so reasonable to me.  I am pretty sure he is still laughing when he thinks back to that conversation.  (Then again, that idea may be sounding pretty good after this week’s snowstorm on the mountain!)

I never saw coming what happened next.  During an exciting and fun trip Corvette trip with my brothers, two cousins, and our spouses last summer, Lee shared his dream with my cousin Tim.  It was at that time the seed of adventure was planted into Tim’s heart and mind.  The entire journey started taking shape in September 2015  when on our way home from spending a week in the Great Smokey Mountain National Park, Lee got the call from Tim saying, “I’m in!”

There was much to be done in a short period of time.  Sometimes dreams that are years in the making come true in the blink of an eye.  Such is the dream for Lee to hike the Appalachian Trail.  Hundreds of planning hours later and dozens of Visa receipts, the day arrived.

On Friday, February 19, 2016, we traveled to Atlanta, Georgia to scoop up my cousin and head north to the Amicalola State Park Lodge where we would spend the night before driving the short (but challenging) distance to the beginning of the Appalachian Trail on Springer Mountain.  Only 4 days earlier Tim had retired from his career job.  What an exciting way to kick-off retirement!  (His wife Sherry may not use those same words but she has been supportive none-the-less!)

Saturday morning, February 20, 2016, amid the fog, rain, and unbridled excitement, these two adventurers began their attempt to thru-hike the Appalachian Trail.  I say “attempt” because always as I talk about the hike, Lee corrects me and says, “I am attempting to hike the trail.”   I know him, I know my cousin and I know their perseverance and they will do everything in their power to make this a thru-hike.

I know this isn’t going to be easy for them, or for those of us left behind.  But there is something totally thrilling to have the privilege of being a part of someone else’s  dream come true.  My prayer life has taken on an entirely new dimension since Saturday morning, February 20, at 10:20 a.m.  I find every quiet moment, every spare thought is lifted to God in prayer for Lee and Tim.  My dream of a closer walk with God is coming to fruition in a way I least expected.

What is your dream?

“Consider it pure joy, my brothers and sisters, whenever you face trials of many kinds because you know that the testing of your faith produces perseverance.”

5 thoughts on “What Is Your Dream?”