With praise and thanksgiving they sang to the LORD: “He is good; his love toward Israel endures forever.” And all the people gave a great shout of praise to the LORD, because the foundation of the house of the LORD was laid.

The end of 2011 is approaching with lightening fast speed.  Thanksgiving will be here 3 weeks from today and after that there won’t be enough hours in the day to get everything done we want to do!  But before we get into that faster than a speeding bullet mode, I was hoping you would share with me three things you are thankful for.  Over the next few weeks leading up to Thanksgiving I plan to post your comments.  I know it will be hard to pick three – but they don’t have to be the TOP three, just three.  Let’s all share in the thankfulness of this season! 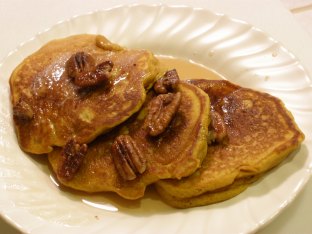 On that note I will tell you that I am very thankful for Facebook friend Kathie Harbin Lane.  She recently posted a picture of Pumpkin Pancakes from Allrecipes.com.  They “sounded” so delicious that I just had to give them a try!  I will tell you now this is a keeper recipe!  The pumpkin flavoring and spices turns the house into the warm and homey fragrance of autumn while it turns the breakfast table in to a roundtable of kudos!  When my mother took her first bite she said, “I believe these are the best pancakes I have ever eaten”.  Well, for an 80 year-old I suspect she has eaten a few pancakes through the years, so I am taking that as a big thumbs up!  Then she added, “to be quite honest I wasn’t very excited about the prospect of pumpkin pancakes, they just didn’t sound that good to me!”  I am thrilled to say I made a believer out of her.  If you are into everything pumpkin this fall — try these!  They are wonderful!

P.S.  The batter is thick and I didn’t do a good job spooning it onto my griddle.  My pancakes each came out a different size.  I still am going to share the pictures, but want you to know I should have done better 🙂 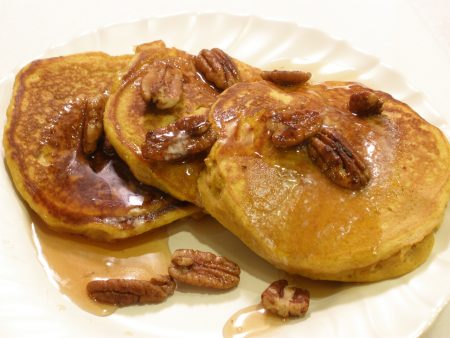 (2)  The original recipe from Allrecipes.com called for twice as much allspice, cinnamon, and ginger.  I decreased those by half and the flavor was great.  You may want to add more to suit your taste.
3.5.3251 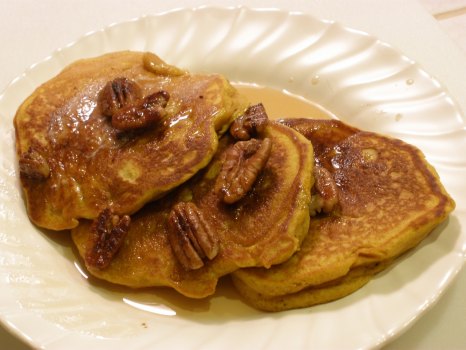 3 thoughts on “Name 3 Things You Are Thankful For”