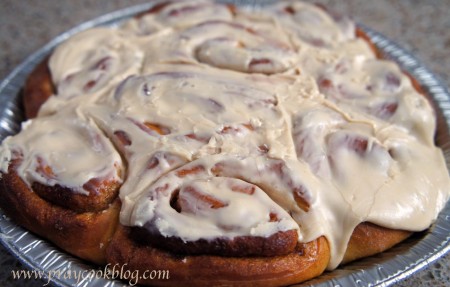 One day last fall I was jumping around The Pioneer Women’s blog reading this and that when I came across her recipe for cinnamon rolls.  She posted the recipe in September 2009 and the pictures were divine!  I absolutely love maple frosting and she slathered lots of maple frosting on her cinnamon rolls.  Even though I have plenty of cinnamon roll recipes, each one slightly different, I knew I could stand to try one more!  I am so glad I did.  Now I just have 1 cinnamon roll recipe – this one!  I have made them several times and the rising dough with yeasty fragrance makes my heart skip a beat.  I am quite aware this is a sickness for which I need help, but I don’t have time if I am going to make these rolls. 🙂 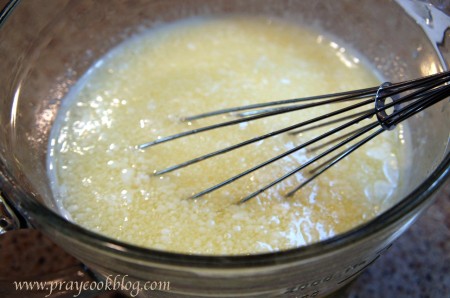 Start this dough by heating the milk, vegetable oil, and sugar in a medium saucepan over medium heat to just below a boil. Set aside and cool to warm. Sprinkle the yeast on top and let it sit on the milk for 1 minute. 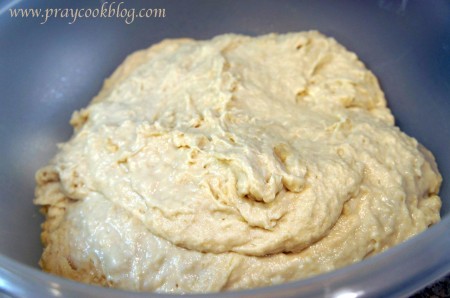 Add 8 cups of the flour. Stir until just combined, then cover with a clean kitchen towel, and set aside in a warm place for 1 hour.

Here is where this recipe differs from any other one I have made before:  After 1 hour, remove the towel and add the baking powder, baking soda, salt, and the remaining 1 cup flour.  The original recipe says “stir to combine.”  I changed up the recipe just a bit by kneading this dough for about 5 minutes in my Kitchen Aid mixer. I think the dough needs the extra kneading time. 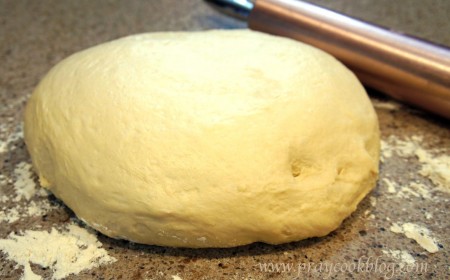 This is the beautiful dough that is ready to use right away or can be refrigerated for up to 3 days, punching down the dough if it rises to the top of the bowl. (Note: dough is easier to work with if it’s been chilled for at least an hour or so beforehand.) 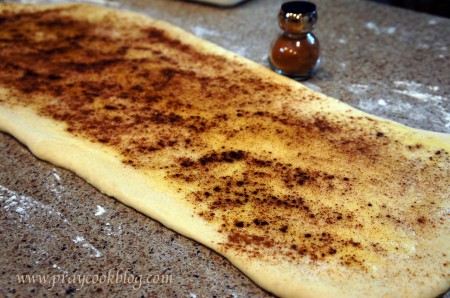 To assemble the rolls, remove half the dough from the bowl. On a floured baking surface, roll the dough into a large rectangle, about 30″ x 10″. The dough should be rolled very thin.

To make the filling, pour melted butter over the surface of the dough. Use your fingers to spread the butter evenly. Generously sprinkle half of the ground cinnamon and 1/2 to 1 cup of the sugar over the butter.  I use the 1/2 cup sugar but the original recipe calls for 1 cup — it’s your choice to taste! 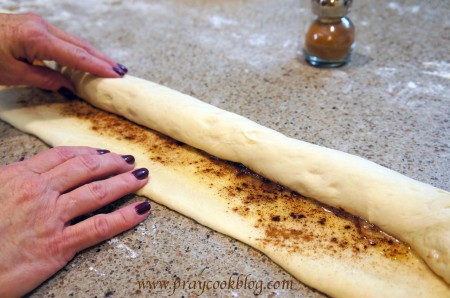 Beginning at the end farthest from you, roll the rectangle tightly towards you. Use both hands and work slowly, being careful to keep the roll tight. Don’t worry if the filling oozes as you work; that just means the rolls are going to be divine. When you reach the end, pinch the seam together and flip the roll so that the seam face down.

Slip a cutting board underneath the roll and with a sharp knife, make 1/2-inch slices. One “log “will produce 20 to 25 rolls. Pour a couple of teaspoons of melted butter into cake pans and swirl to coat. Place the sliced rolls in the pans, being careful not to overcrowd. (Each pan will hold 7 to 9 rolls.) Use disposable pans if you plan on sharing with friends, family, and neighbors! 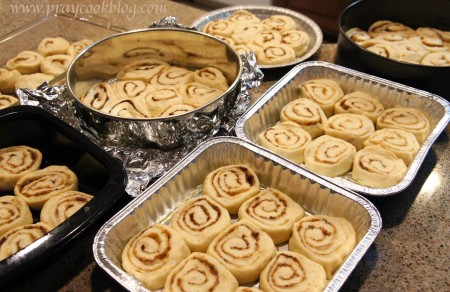 Repeat the rolling/sugar/butter process with the other half of the dough and more pans. Preheat the oven to 375°F. Cover all the pans with a kitchen towel and set aside to rise on the countertop for at least 20 minutes before baking. Remove the towel and bake for 15 to 18 minutes, until golden brown. Don’t allow the rolls to become overly brown.

While the house is filling with the fragrance of fresh bread, cinnamon, and the sweetness of sugar make the maple icing: In a large bowl, whisk together the powdered sugar, milk, butter, coffee, and salt. Splash in the maple flavoring. Whisk until very smooth. Taste and add more maple, sugar, butter, or other ingredients as needed until the icing reaches the desired consistency. The icing should be somewhat thick but still very pourable. The first time I made them I used too much coffee and the flavor was a little over-powering for me.  However, the coffee drinkers in our household thought it just perfect!

Remove pans from the oven. Immediately drizzle icing over the top. Be sure to get it all around the edges and over the top. As they sit, the rolls will absorb some of the icing’s moisture and flavor. 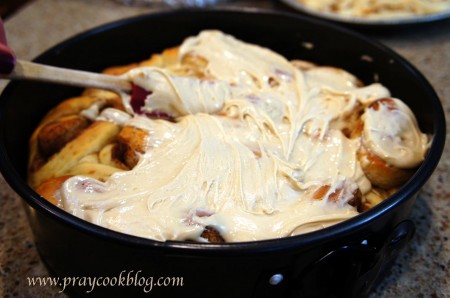 I ran short of “cake pans” and used my springform pans which turned out really well since they were very easy to get out of the pan! 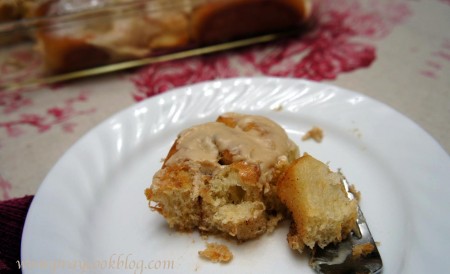 These rolls totally melt-in-your-mouth disappearing quickly! The PW was clever when she put together a recipe that makes such a huge batch — she knows they won’t last long. And now I know it too! 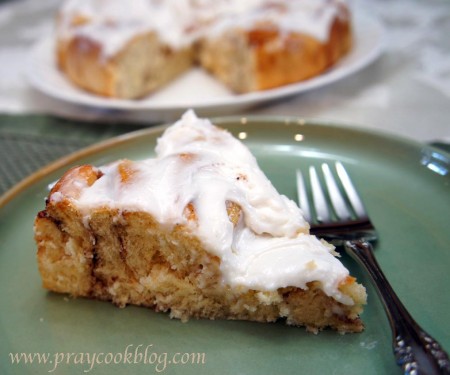 This panful I topped with a creamy white vanilla frosting and cut the slices as I would coffee cake.  It’s a fun way to devour cinnamon rolls for breakfast, brunch or snack!

The best part of this recipe is that it makes a lot and sharing is a must!   Get the recipe here!