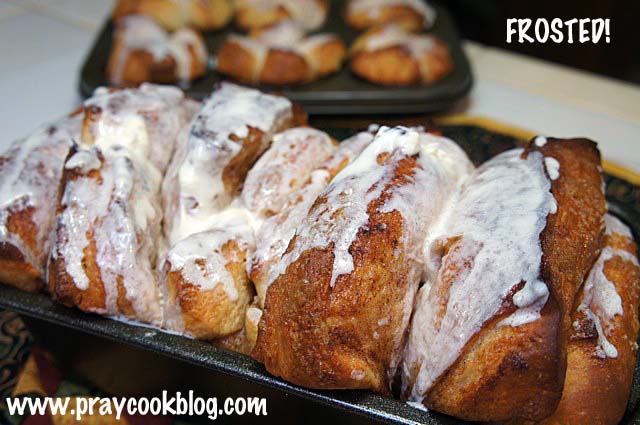 If you live in a small town or rural area with lots of kinfolk close by, you may receive recipes something like this.  You get it from your neighbor, who received the recipe from her cousin, who got it from someone they worked with, who was given the recipe by your grandmother!  It is true, really great recipes have a way of just working around a circle of bakers and cooks.

Recently I received an email from my friend Sue.  She said she had gotten an email from a friend in California who she hadn’t heard from for some time.  Her friend said she was making “Sun tea” and thought of Sue and decided to send her note.  As far as I know and as far as Sue can remember, she doesn’t make Sun Tea!  But for some reason her distant friend thought she is the sun tea maker among their friends.  Her friend did mention she was going to make it into an Arnold Palmer.  Down south we just call it a half ‘n half.  Half iced tea and half lemonade.  Arnold Palmer made the drink famous and he calls it Arnold Palmer Tee!

A few weeks ago I was drawn to a web post on one of my favorite sites, Our Best Bites.  The title … Cinnamon Pull-Apart Bread.  The picture, this one: 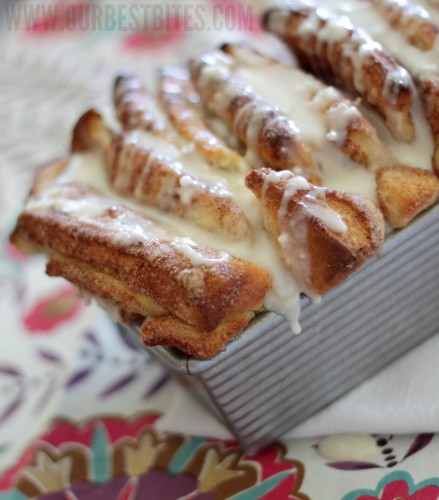 I’ve never made Cinnamon Pull-Apart Bread.  I’ve make Monkey Bread and you pull it apart to eat it.  I’ve made lots of cinnamon rolls and you can unwind a cinnamon roll from the outside into the very best part in the center, but pull-aparts baked in a bread pan intrigued me, so I read on.

Kate at Our Best Bites posted that the recipe was inspired by Joy the Baker.  When I looked at Joy’s cinnamon pull-aparts post her luscious bread looked like this. 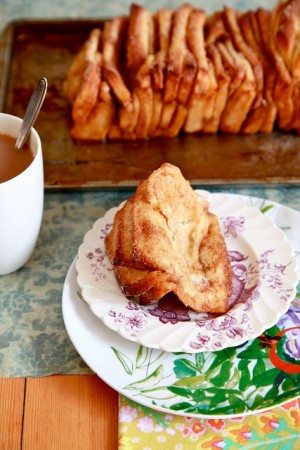 Kate also said the recipe was adapted from The Pioneer Woman.  So of course being the curious sort I took a peek at the wild frontier of Ree. The recipe that Kate adapted into her Pull-Aparts came from Ree’s cinnamon rolls.  It is going to be a keeper recipe for me too!  The dough turns out awesome! 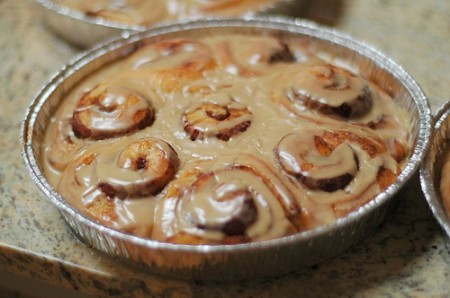 By now I was hooked.  I just had to have a go at Cinnamon Pull-Apart Bread.  The bread dough recipe is very similar to my yeast dough recipe starting with scalded milk, sugar and oil.  Cooled down before adding the yeast.  The best temperature for adding the yeast is between 100 degrees and 115 degrees F. 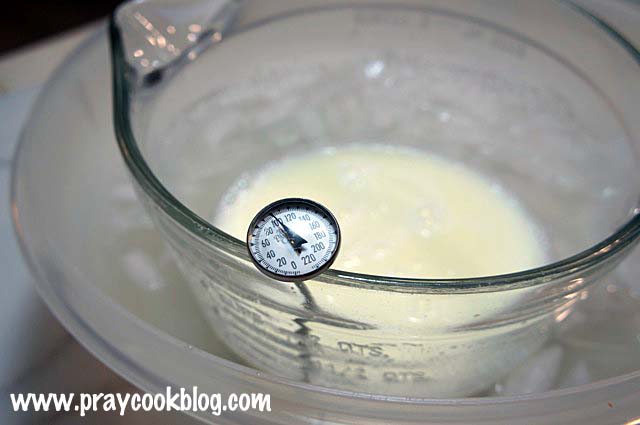 Flour is added to the liquid and mixed well.  Kate stirred hers with a wooden spoon.  My kitchen aid did the work for me.  Here is where this recipe takes a turn from my usual bread making.  Baking soda and baking powder is added along with some salt.  At this point the bowl of dough is wrapped in plastic and can be refrigerated for a couple hours or up to 24 hours.  I made by dough in the evening and placed it in the refrigerator overnight. 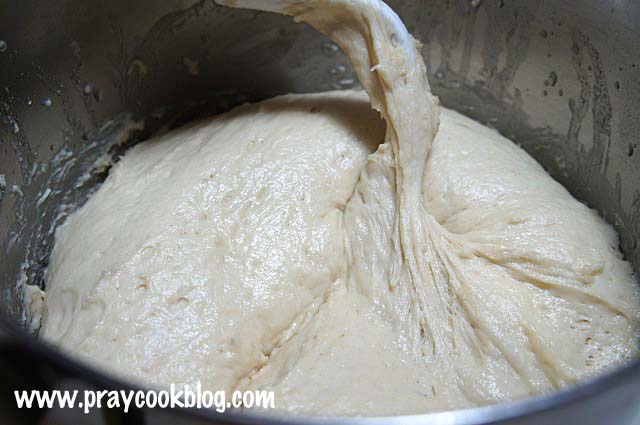 In the morning it only took 1-½ hours from refrigerator to table.  The beautiful dough is rolled out into a rectangle about 18” inches wide and 9” tall.  It is spread with butter and cinnamon and sugar.  Using a pizza wheel, or a very sharp knife, the dough is cut into six 3” strips and those strips are each cut into 3 pieces, leaving 18 3” squares.  Even using a ruler you can see that I ended up with a few little squares.  Not to worry though I had the perfect use for those! 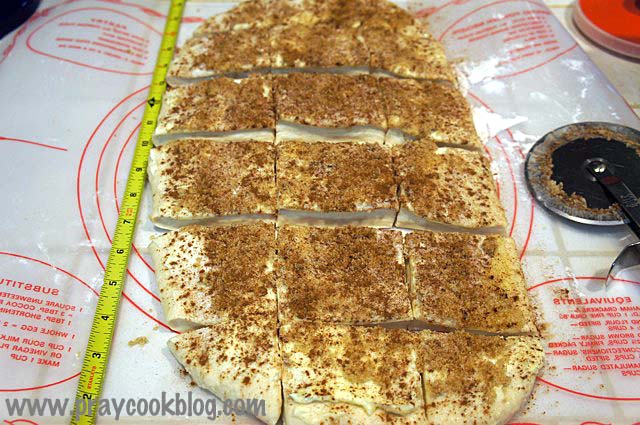 The squares are then placed into the 9” x 5” bread pan.  The squares are laid with the cut side up (not the flat sugary side.)  I used 12 of the 3” squares in my bread pan.  You must be careful not to overfill the bread pan, as it will bake to over-flowing if you do.  I used the remaining 6 squares by cutting each square into thirds and placing them in a muffin tin. 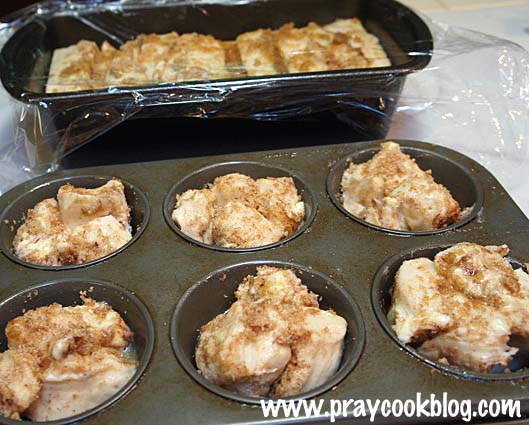 At this point the dough only needs to rise 30 minutes, just long enough to do a little clean up and pre-heat the oven.  Thirty minutes later the fragrance of fresh baked bread will permeate the house and send all family members directly to the kitchen to find out what’s in store for breakfast! 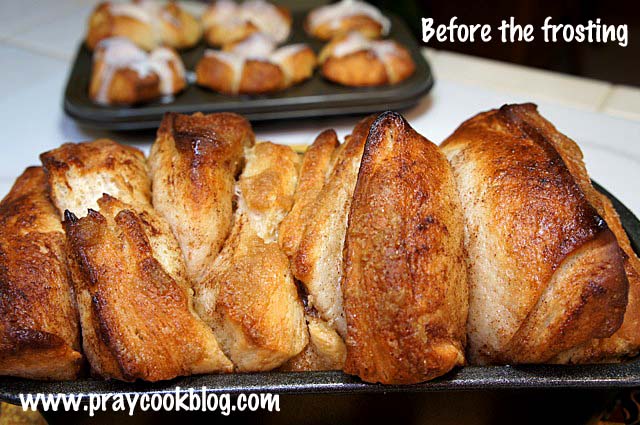 They can be served with or without frosting.  Since I am an admitted over-achiever, ours dripped with frosting as we ate each luscious bite. 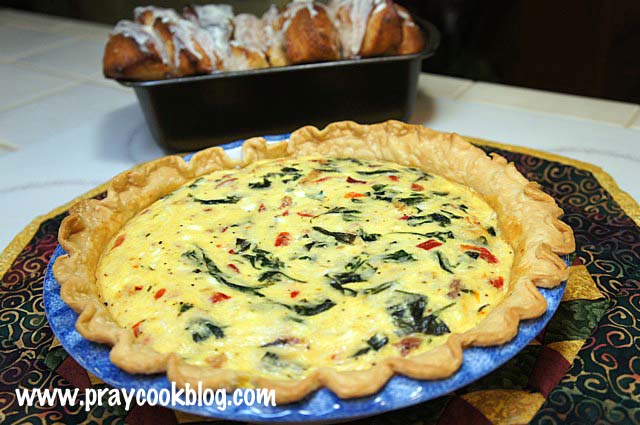 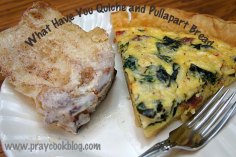 I left them there for three weeks.  This week my brother and his wife stopped by for an over-nighter and I pulled these from the freezer warmed them up, added triple berry baked oatmeal and it was a breakfast feast! 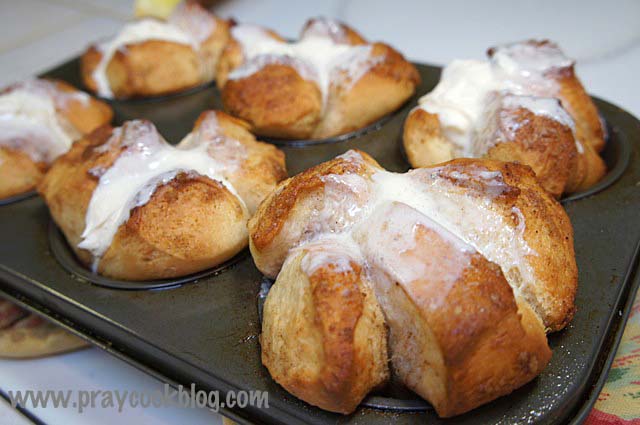 Many Blessings and Happy Cooking!

In a microwaveable bowl combine milk, sugar, and oil. Microwave on high about 3 1/2 minutes until mixture reaches 180 degrees. Remove from heat. If you have lots of ice handy, dump some in a larger bowl and place the scalded milk bowl over the ice.

Cool the mixture to 105 to 110 degrees. If you don’t have extra ice, just set milk out to cool. When the milk has cooled, remove from ice and sprinkle yeast over the milk mixture. Stir only to mix. Allow to stand for 5 to 10 minutes. Stir in 4 cups of flour and cover. This can be done with a mixer or with a spoon by hand. Dough is very soft, more like a batter at this point. Allow to stand for 1 hour.

Mix in remaining 1/2 cup flour with baking soda, baking powder and salt. Sprinkle over dough and mix well, again via the mixer or by hand. Cover with plastic wrap and place in the refrigerator for at least 2 hours or overnight.

Grease a 9″x5″ loaf pan and a small muffin tin. Set aside. When you are ready to use the dough, turn it onto a lightly floured surface. Roll the dough out with into a rectangle about 18″ wide and 9″ tall. Spread with 4 to 6 tablespoons softened butter. Sprinkle with 1/2 cup sugar and and even sprinkling of cinnamon. More or less according to your taste.

Using a pizza wheel, cut the dough into 6 3″ strips. Stack the strips 3 high (so you have 2 piles). Cut each of the stacks into three 3″ squares. Place the squares sideways, cut side up (not the flat sugared side) into the prepared pan, being careful not to stuff too much dough into the pan. Leftover dough pieces can be cut into fourths and baked in a muffin tin.

Melt remaining 2 tablespoons of butter and drizzle over the loaf. Sprinkle lightly with cinnamon and sugar. Cover and allow to rise for 30 minutes. While loaf is rising, preheat oven to 350 degrees F.

Bake for 25 to 35 minutes (or until baked through). Remove from oven and cool slightly. Whisk together the glaze ingredients until smooth and desired consistency is reached. Place the glaze in a ziploc bag, snip off a small corner of the bag and drizzle over the loaf and muffin tin.