One of the greatest gifts I have received in my lifetime is the gift of friendship.  I can think back at least 5 decades (and a little more) and name dozens of men and women who have walked with me in love and friendship.  The number of Godly men and women who influence my daily walk with Jesus has never been higher than it is today.

Whoever walks with the wise becomes wise,
but the companion of fools will suffer harm.
Proverbs 13:20

Two are better than one, because they have a good reward for their toil.   For if they fall, one will lift up his fellow.
But woe to him who is alone when he falls and
has not another to lift him up!
Ecclesiastes 4:9-10

Six years ago almost to this exact day the Chief, my sous chef dishwashing mom and I moved out of the city into the country in the hills of middle Tennessee.  I had never lived in the country before.  I wasn’t sure what to expect with “country living” but one of the best surprises has been NEIGHBORS!  You see, with our home sitting on a few acres out in the country I just didn’t think I would get to know my neighbors.  But I couldn’t have been more wrong.  It has been just the opposite!   It turns out that distance doesn’t define neighbors.  I realize you can live in a cul-de-sac neighborhood in the heart of the city and not know the people who live next door!

Now I live in the country and have true friends and neighbors all up and down the 2-mile long road we live on.  We have actually discovered a second cousin who lives right down the road and who has become a great friend!

It was a sunny February Saturday.  We were  still unpacking all our “stuff” as the Hughes Family walked the mile from their home to ours to introduce themselves.  It was such an unexpected “meet and greet”! With smiles and hugs they welcomed us to the neighborhood.

When we first met, Gaye and I became fast friends.  We discovered we both loved being a homemaker, cooking, baking and feeding others! It didn’t take long for our lives to become intertwined as we discovered our most precious commonality – the love of our Lord and Savor Jesus!

A friend loves at all times,
and a brother is born for adversity.
Proverbs 17:17

Today I want to share my friend Gaye’s website with you.  During the past 5 years, Gaye found herself walking beside her husband of 25 years, during his fight with pancreatic cancer.  About 3 years into that fight Gaye was diagnosed with an aggressive form of breast cancer and for over a year their days and weeks were filled with surgeries, chemotherapy, radiation and one appointment after another.   Last March David went home to be with the Lord.  Since that time Gaye has channeled her praises and pain in writing a blog titled Praise You In My Storm.

Today Gaye writes straight from the heart.  She doesn’t mask anything.  Pain, joy, praise, struggle, laughter and tears.  It is all there wrapped up in encouragement to others for whatever they are walking through.

I hope you will find time to check out her blog.  Read some of her writing, and sign up to receive her blog posts automatically.  You will be blessed!

And finally, to you, my reader.  Writing this blog for nearly 5 years, I have added to my “friends list” as you have become such an important part of my life.  Thank you for following, reading, commenting, and cheering me on!  God Bless you and your family.

What’s for dinner?  I am making Ham, Potato, and Corn Chowder!
What’s on your menu? 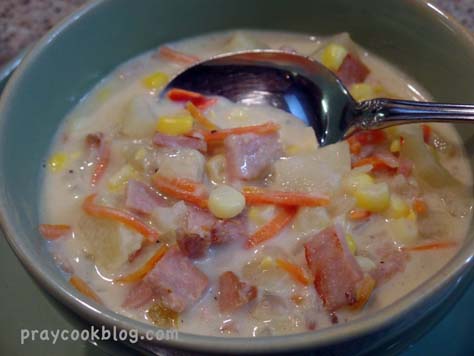 2 thoughts on “The God-given Gift of Friendship”