Today I was preparing to write this blog post while staying with a friend.  When she passed by me she said “I won’t be a moment” to which I replied, “no worries, I am happy as a clam.”

As soon as the words were out of my mouth I thought, where did that come from? Are clams happy?

I couldn’t leave it alone and here is what I found from a quick Google of The Phrase Finder.

“Why would clams be happy? It has been suggested that open clams give the appearance of smiling. The derivation is more likely to come from the fuller version of the phrase, now rarely heard – ‘as happy as a clam at high water’. Hide tide is when clams are free from the attentions of predators; surely the happiest of times in the bivalve mollusc world. The phrase originated in the north-eastern states of the USA in the early 19th century. The earliest citation that I can find is from a frontier memoir The Harpe’s Head – A Legend of Kentucky, 1833:

“It never occurred to him to be discontented… He was as happy as a clam.”

The first record that I can find of the ‘high water’ version is from the Pennsylvania newspaper The Adams Sentinel, August 1844:

“Crispin was soon hammering and whistling away as happy as a clam at high water.””

I love like the part … “it never occurred to him to be discontented.”  This is how I want to live my days.  Even in rough times, we don’t have to be discontented because we can take all our cares to the LORD.  Aren’t we blessed?  Yes.

Speaking of blessed, the Hen of the Woods mushrooms that made up this soup came from our friends who picked them fresh while on a walk through their woods.  This recipe has had  9,152+  views since I wrote it. 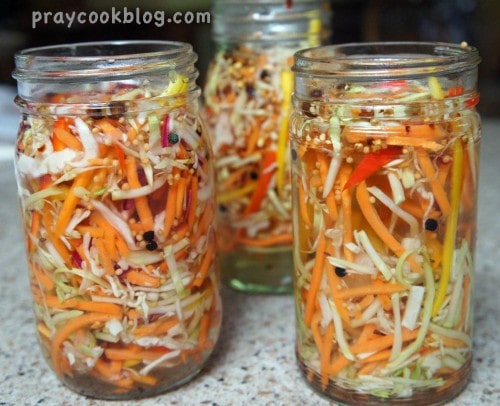 Pickled Vegetable Sandwich Slaw has seen 8,404 views since posting nearly 2 years ago.  This is a fun summer recipe as the slaw adds a crowning touch to everything from a turkey sandwich to hotdogs!  It’s time for me to make a new batch.

I hope your summer is off to a great start!
Blessings, Catherine 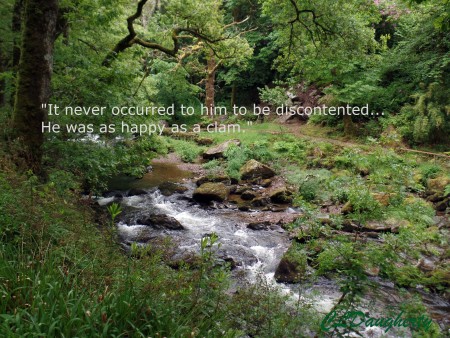 2 thoughts on “Throw Back Soup and Crispy Slaw for Sandwiches”