Our 51-year-old nephew, Richard, is confined to a wheelchair due to a degenerating spinal stenosis.  A couple of years ago a fall in his place of business rendered him a quadriplegic.  A life-saving surgery fused rods in his neck leaving him unable to move his head from side to side, but allowing his lungs to expand and continue providing him life-giving air!  Through the grace of God he has enough mobility in his hands to operate a power wheelchair.  It is a blessing to have a room and care in a skilled nursing home. But it is also a curse.  He is a young man in an old man’s world.

It was a few days before Christmas.  The town was buzzing with people hurrying from place to place.  Daylight savings time robbed the late afternoon light and a few twinkling Christmas lights provided the only glow down the street.  Richard carefully maneuvered his power wheelchair out into the fresh evening air.  It felt so good to leave behind the close heaviness of the air inside the nursing home, if only for a brief moment in time.

Freedom.  For the next few minutes he would feel the freedom to ride his motorized wheelchair down the curb, across the street and a short block to the corner market.  It was there he could talk with the young people working behind the counter.  Talk about life. Talk about anything that didn’t include nursing home food or the next doctor’s visit.

The traffic lane was clear of any vehicles.  He powered his chair forward and began to move across the street.  It was just then that a strap from his chair cushion fell to the side of the chair and caught the wheel.  The motion caused the wheelchair to pitch him forcibly forward and off of the seat.  In the middle of the street, his lower body slid to the concrete leaving him suspended between the chair seat and the roadway.  Unable to move he began yelling for help.

Is it any surprise that Santa Claus then appeared!  Yes, a man dressed as Santa on his way to a Christmas event suddenly was at his side.  A women, in another car, approached and placed her vehicle sideways to block on-coming traffic.

She and Santa then began to help Richard back into his motorized wheelchair.  What happened next even surprises me as I write this. There was a truck that approached the area.  When the driver realized he was blocked and would have to wait until Richard was securely back in the chair, he began to blow his horn.  Yes, he honked his horn continuously until the woman and Santa had helped Richard and they were all safely out of the street.

I realize there are many facets to this story and an argument can be made that Richard shouldn’t be allowed outside the nursing home for his own safety.  But I also know the mental relief he gets when he feels freedom in the fresh air. The freedom to talk normally with others his own age.  The momentary freedom that exists when the nursing home is in his rearview mirror, if only for a short while.

What I can’t wrap my head around is a society where there is anyone in such a hurry as drive on leaving a quadriplegic suspended in the middle of a street.  Or a man who impatiently and continually blows a  horn as this truck driver did.  I can’t and won’t accept the driver in the truck had a need greater than lifting a quadriplegic from the concrete back into his chair.  A chair that provides the only mobility possible for our nephew.

It has been about 3 weeks since this happened.  I have wanted to write and tell you about it.  But actually, I didn’t know where to start or where to end.  In the 3 weeks that have passed, and I have talked with Richard about this, I decided to pray for this man.  Oh, I pray for Richard every day.  But I am talking about the impatient, rude, self-centered horn-blowing man.  He is the one I am praying for also. And the drivers of the two vehicles that “moved around him” instead of stopping to render help. 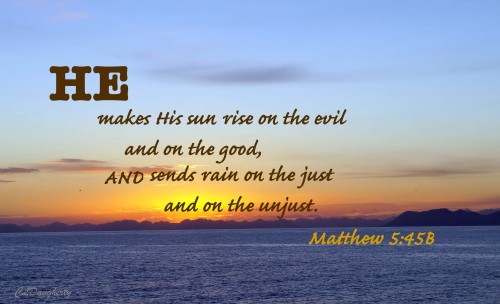 43 “You have heard that it was said, ‘You shall love your neighbor and hate your enemy.’44 But I say to you, Love your enemies and pray for those who persecute you, 45 so that you may be sons of your Father who is in heaven. For he makes his sun rise on the evil and on the good, and sends rain on the just and on the unjust. 46 For if you love those who love you, what reward do you have? Do not even the tax collectors do the same? 47 And if you greet only your brothers, what more are you doing than others? Do not even the Gentiles do the same? 48 You therefore must be perfect, as your heavenly Father is perfect.    Matthew 5:43-48

9 thoughts on “You Really Aren’t Going To Believe This”