Proverbs 18:24
One who has unreliable friends soon comes to ruin, but there is a friend who sticks closer than a brother. 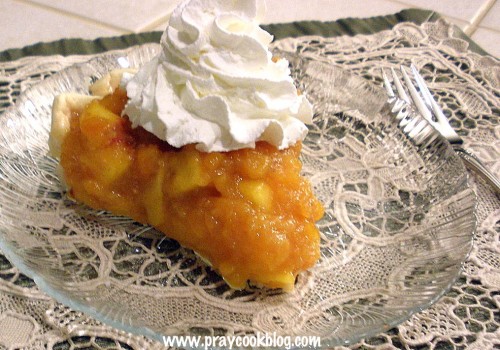 Have you had a chance to take a look at my Home Page on this blog?  My home page, Pray, Cook, Blog has taken on a new look with the addition of a prayer, written by Pastor Allen Jackson of World Outreach Church.  I am excited because WOC is allowing me to re-post Pastor Allen’s prayers that he brings to us each week this year.  I believe prayer changes things.  I am living proof that prayer can set a rocky course straight, can keep a challenged family believing, and that God hears and answers our anguished cries through prayer.

When I first posted a recipe for Aunt Mildred’s Fresh Berry Pie, I posted a picture of the couple who gave me the recipe.  At that time I didn’t have any fresh berries to make a pie and share a picture.  However, the garden is a plenty with fruit and veggies and so yesterday mom and I froze white peaches, which were gift to us from Liz and Leon, beautiful sweet corn from my husband’s garden, and when the day couldn’t get any busier my dear gardener brought us basket upon basket of red beans to be shelled.  When the day was done, we were contented and tired all rolled in to one!

But, I digress.  In the midst of our day in the kitchen, Lee brought in a small basket of pitiful looking peaches from our own peach tree.  You see, this year the Cicadas bore into our peach trees leaving the limbs broken and the fruit dropped to the ground. When it was all said and done we had this one little harvest of large, but spotty peaches.  Well, as it turns out, once we got the skins off the peaches, they are wonderful  (who said “don’t judge a book by its cover?” ) So, our neighbors benefited with a Fresh Peach Pie and we dined on garden veggies and Fresh Peach Pie for dinner! I used fresh white peaches in the pie and made the mash out of the yellow peaches from our trees.  Ooo-la-la what a combination!

When I went looking through my blog for Aunt Mildred’s Fresh Peach Pie recipe I realized that I never posted a picture.  So, today … here are the pictures.  This recipe works for most berries and it really is divine.  I hope you will have your own fresh pie berry, berry, soon 🙂   Have a lovely day! 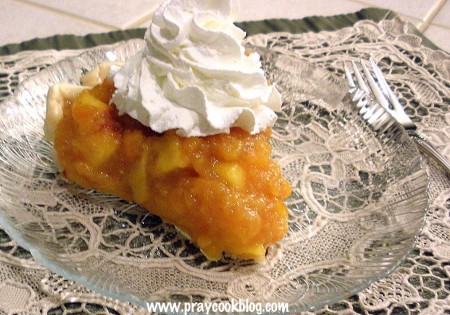 1. You can vary the amount of sugar depending on the sweetness of the fruit and to taste.

2.  You may use 1 cup frozen fruit to make the mash. Just thaw and follow the recipe.
3.  This recipe works equally well for other fruits and berries!
3.5.3251

Although its botanical name Prunus persica suggests the peach is native to Persia, peaches actually originated in China, where they have been cultivated since the early days of Chinese culture. Peaches were mentioned in Chinese writings as far back as the 10th century BC and were a favoured fruit of kings and emperors. Recently, the history of cultivation of peaches in China has been extensively reviewed citing numerous original manuscripts dating back to 1100 BC.[2]

Its English name derives originally from the Latin malum persicum, “Persian apple”, which became the French pêche, then peach in Middle English.[3]

The peach was brought to India and Western Asia in ancient times.[4] Alexander the Great introduced the fruit into Europe after he conquered the Persians.[4] Then it was brought to the Americas by Spanish explorers in the 16th century, and eventually made it to England and France in the 17th century, where it was a prized, albeit rare, treat.[citation needed]

The horticulturist George Minifie supposedly brought the first peaches from England to its North American colonies in the early 17th century, planting them at his Estate of Buckland in Virginia.[5]

Various American Indian tribes are credited with spreading the peach tree across the United States, taking seeds along with them and planting as they roved the country.

Although Thomas Jefferson had peach trees at Monticello, United States farmers did not begin commercial production until the 19th century in Maryland, Delaware, Georgia and finally Virginia. California today grows 65% of peaches grown for commercial production in the United States,[6] but the states of South Carolina, New Jersey, Georgia, Michigan, Pennsylvania and Washington also grow a significant amount.[7] Italy, China, India and Greece are major producers of peaches outside of the United States.

In 2010, a team of researchers at Clemson University, USA, announced they had sequenced the peach tree genome (doubled haploid Lovell).[8][9]

2 thoughts on “The Garden Harvest and Fresh Peach Pie”