Updated:  September 24, 2018, Since writing this blog post it has generated several comments from folks who know more about mushrooms than I.  The good news is that this Hen of the Woods soup recipe tastes great with either mushroom!  Pictures have also been updated.

Recently friends gave us some beautiful Maitake mushrooms.  Maitake mushrooms (Grifola frondosa) – also known as “Hen of the Woods” – are succulent and delicious.  In the U.S.,  they can be found in Asian grocery stores.  The mushroom is known by its Japanese name “Maitake”, which means “dancing mushroom.”

Our friends had special ordered them.  The seeds arrived in a block of sawdust type material.  They allowed the seeds to mature in the bag, then unwrapped and watered 2–3 times a day. Clusters of Maitake mushrooms sprung forth, and we were the lucky recipients of some of the fruits of their labors.

Now, what to do with them?  I began searching for just the right soup recipe.  I am still making winter soups each week and so when I found a Maitake Mushroom Soup recipe I need not look any further. It was now time to make Hen of the Woods soup!

This recipe begins with a saute’ of onions and garlic in olive oil and a little butter.  I added chopped mushrooms, carrots, potatoes.  This mixture began filling the house with the most wonderful fragrances.  After this, I added chicken bouillon, although some Hen of the Woods soup recipes call for vegetable broth.  Either one works.

After cooking and cooling, I blended to a nice purée.  At this point, the soup could be refrigerated for later use, which is what I did.  The next day, I warmed up the purée, added some white wine and a bit of heavy cream and the end results were undoubtedly the best Hen of the Woods soup I had ever eaten.

My two culinary consultants agreed as we licked the bowls clean! I think this Hen of the Woods soup recipe would work well with just about any of your favorite mushrooms, and especially a shiitake mushroom.  The recipe called for a pound of mushrooms, I didn’t have that much but what I had worked perfectly for half a recipe. 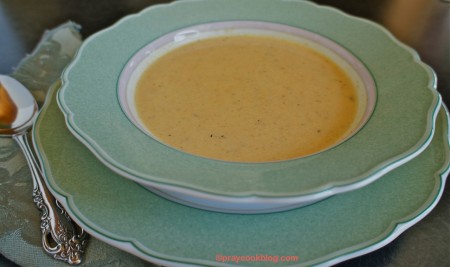 Save Print
Prep time
20 mins
Cook time
45 mins
Total time
1 hour 5 mins
This delicious edible mushroom is known by its Japanese name "Maitake", which means "dancing mushroom". This rich, creamy full bodied soup is a complete meal in itself!
Author: The Mushroom Forager
Serves: 8
Ingredients
Instructions
Notes
(1) Eight ounces of tofu blended in a little bit of the broth can be substituted for the heavy cream. The taste and texture will not suffer at all!
(2) If you don't have 2 lbs of mushrooms, use whatever you have and the soup will still be great.
(3) Ingredients can be cut in half with no problem.
3.5.3226